Work and fun (hopefully at the same time!) with my voice

I feel like a kid on Christmas! I hooked up my brand spankin’ new HP laptop, Blue Yeti pro mike and Sennheiser SD202 headphones, loaded Audacity onto the PC and took it for a spin.  One of the easiest things to put together, I am happy and relieved to report.  Whaddya know, for the first time in my decades-long experience with computers, plug-and-play actually worked out of the box!

A portable recording studio as easy as you please.  And with Sony SoundForge on my workhorse desktop, I can finally get to work on my audiobook(s), and contract out work for others. 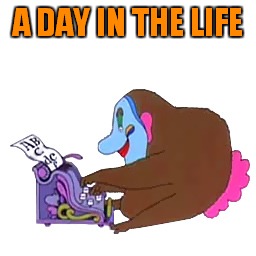 I’m in a phase of my work, where I’ve got the following irons in the fire:

Several of my fellow authors, not the least of whom is Kristen Lamb, have given me copious amounts of useful advice on how to multi-task all the activities that are required of the modern author. I see it can be done, as there are so many success stories to draw from. But there are still days where I feel like the guy in the Progressive commercial, who walks up to a chain saw juggler and says, “OK, I got this!”

About a decade ago in a previous business life, my department head observed the whirlwind of activity at my desk and computer.  Shaking his head in disbelief and admiration, he complimented me with “How do you work on of all these projects at once?”
Though I still plow merrily along, I am forced to confess these days it is not as easy as it used to be!

I woke up this morning at 4 a.m.
And I started talking to myself.

Taking those statements at face value, it sounds like I should be locked up somewhere.  But I have found the act of talking to myself to be an invaluable tool.

It is well documented that Thomas Edison recorded ideas for his inventions in several notebooks; and that he hated sleep, preferring catnaps to long hours of slumber.  On several occasions, I had heard that Edison practiced sleeping with a bell and a notebook in hand – so that when he began to nod off, the bell would ring and he could immediately write down the ideas that his shadowy subconscious mind would generate.  I have found no solid documentation such a thing actually happened, and therefore surmise that this American legend was born out of a combination of the documented facts.

While I certainly would not count myself in Edison’s stratosphere of creativity, I find that my best story ideas and twists come in the dead of night.  But I don’t have a notepad next to my bed, nor do I intend to start such a practice.  I, unlike Edison, enjoy a solid 6-8 hours communing with Hypnos.

But I do often have my best ideas in the middle of the night. This morning’s bout of insomnia was a perfect example. So, how do I capture them?

A good friend, author Christine Bush, commiserated that she also wakes up in the middle of the night with good ideas. She would promise herself that she would write them down first thing in the morning, and then nod back off. But come the dawn, she could not for the life of her recall one whit of the brainstorm. I suggested she do what I do.  While I don’t write down the dream-inspired ideas, I speak them out loud before going back to sleep. For me at least, the process of engaging a different part of the brain, normally inactive during REM sleep, solidifies the memory.

Like any advice, I have to add the proviso — “It works for me. Your mileage may vary*.”

I thought I was terribly clever when I started the practice of reading my drafts out loud, as part of my editing and error-correcting process. Several writers have since told me that it is a common and highly recommended practice. (Months later, I had to repress a snicker when a keynote speaker of a writer’s conference touted this important point with all the earnest fervor as if she were Champollion revealing the secret of the Rosetta Stone.)

However, I have come to the conclusion that I have added something novel to that process.  That being said, if someone has already come up with this practice, I doff my cap to them. But I still document this process here in hopes it may help others.

When I read my drafts out loud, I record about an hour’s worth with my microphone and Sound Forge (voice talent, remember?). I fold my arms and force myself not to touch the keyboard during the reading. I try to keep the reading as emotionally flat as possible, and slow enough that each syllable is enunciated clearly. I do, however, interrupt the reading to pepper the verbal flow with editorial commentary. For example, after a sentence I might add: “choose a better word”, “that just scans bad”, “sounds awkward”, “split up this run-on”, “it’s there, not their“, etc. Quite often, I would stop in a middle of a paragraph and leave myself an audio equivalent of a post-it note: “check if this is consistent with what happened in Chapter X”, “this gives me an idea – add XYZ to the next chapter’s outline”, etc.  After fetching a fresh cup of joe, I play back the audio file. Then, and only then, do I edit the draft text according to what I said in the recording.

I have found this process to greatly enhance the simple process of reading drafts aloud, because it engages several parts of the brain simultaneously – reading, speaking, listening.  When all three logic centers are actively engaged, a synergy occurs illuminating all sorts of errors and inconsistencies.  I can attest to that, because each and every step of this process helped me uncover new errors in the drafts, even during the final step of reading along with my recorded voice.

I hope this helps, and that you find talking out loud to yourself a useful tool.

* Yes, I know there’s a common social media acronym for this. I choose not to use it.

During the weekend of August 8-10 2014, I volunteered at OTAKON XXI. I’ve been a member of staff for 20 of those 21 years (less 2 due to medical reasons). Once again, in addition to being a worker bee in the Gofer Department, I (as “The Voice of OTAKON”) introduced Saturday’s Masquerade/Cosplay along with Friday’s Altima and Sunday’s Yoshiki X-Japan concerts.
I wish I had taken my camera, because a few of the costumes were absolutely stunning – my favorite was the Nature Spirit from Miyazaki’s “Mononoke Hime”. During the concerts, I especially appreciated the work of Altima’s “Sato” and Yoshiki himself. Sato was the instrumental workhorse of the Altima group, playing the synths and electric guitar, and Yoshiki led his string quartet and hard-rocking X-Japan compatriots from his piano and synth. But then, I’m biased because I, too, am a keyboardist. So there.
One would think that I would be an old hand at this shtick, but I still get butterflies when I address, cajole, and joke around with a concert hall filled with excited anime fans. (The largest audience was when I introduced L’Arc En Ciel in 2004, and TMRevolution in 2013 – you really haven’t experienced stage fright until you’re in front of 12000 screaming fans, led by a thousand frantic Japanese fangirls!) My favorite was also in 2013, when I introduced Yoko Kanno – a delightful person, an accomplished composer and marvelous talent. I had the privilege of watching her perform from the wings, where I could observe and crib her piano technique! 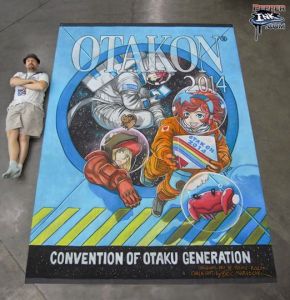 Fairy Tale of the Month

Searching for Light in the Darkness

The Art and Craft of Blogging

The latest news on WordPress.com and the WordPress community.